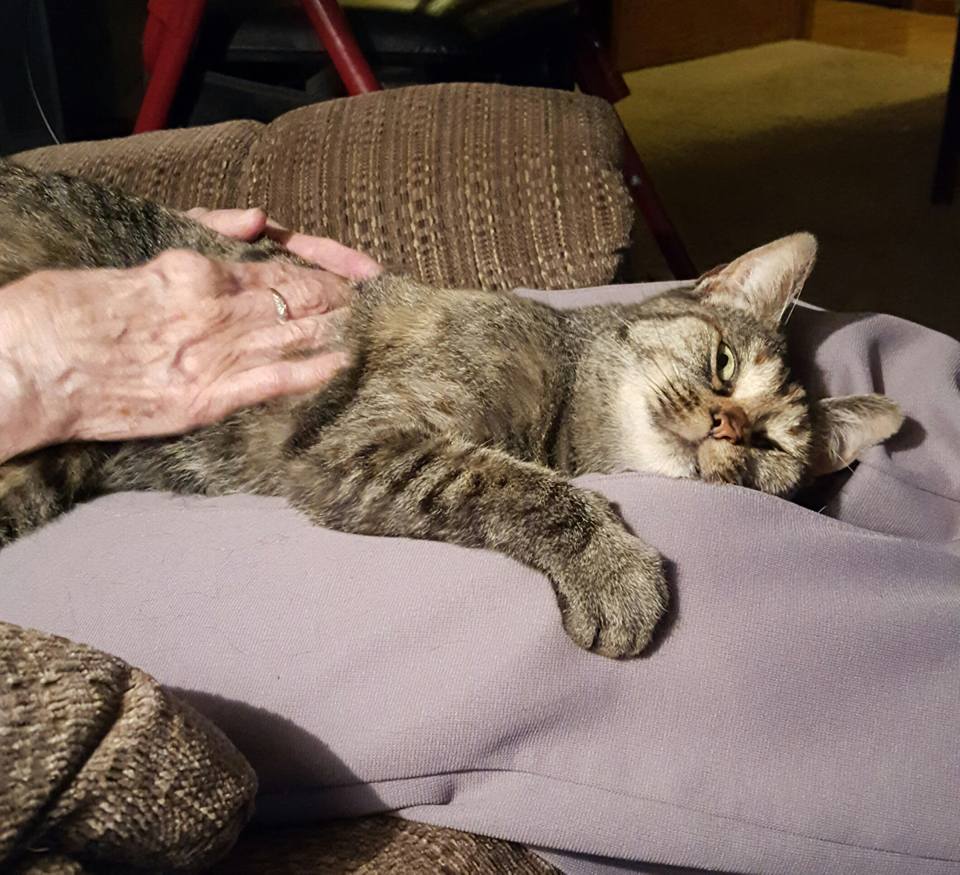 A few months ago this cat showed up at our door. For three days she just hung around the yard. We already owned one cat. I felt one cat is enough for a lifetime and we were a perfectly happy little family. I was a totally content, cold-hearted, cat hater.

On the fourth day the cat was still hanging out in our yard and it was really cold. Since I was under a vow to never own another cat I knew there would be no way her kitten eyes could get the best of me. So I placed a bowl of food and some clean water in the warm, safe, enclosed front porch.

By the time dinner was over that night Grandma had named the cat “Meisje” (pronounced My-Sha, dutch for girl) and decided it wouldn’t hurt to just let the cat in for one night. The cat immediately curled up on Grandma’s lap to sleep. A few days after that, Grandma, Natalie, and I were leaving the vet’s office with a newly vaccinated and flea treated pet.

Turns out, trips to the vet are a caretaker/toddler mom nightmare.

Since Meisje came in as a stray I had to take both her and my old cat Ryhkhey in together. There was no chance that Ryhkhey would share her carrier. But we had a ridiculous amount of empty diaper boxes. Perfect. Grandma suggested that we put Meijse in a diaper box and tie it closed with yarn.

Something you should know about Grandmas: what we do with duct tape, grandmas do with yarn.

So here we were, standing in the kitchen trying to shove this poor cat into a box, keep her there, and wrap it shut with yarn. The result was me being tied to the box and the cat escaping. Grandma finally agreed that we could try the tape.

Fast forward- cat back in the box, Grandma with her handy yarn, two year-old standing on the kitchen table, and me holding the box shut, trying to secure it with tape. I got about half-way when the tape ran out and the cat ran out too. Again.

Now we were about 15 minutes late for the appointment. That’s standard Melinda Time (I’m late for everything!) so we are still good, but it was definitely time to leave fast. The box was still not quite secure, and I was telling Natalie to get her shoes on as Grandma stood in the doorway with her coat and purse. Without a beat we were now at least 20 minutes late.

Getting grandma, two cats, and a child into the car is not a quick process so I skipped a few steps. Natalie’s shoes still fit in my pocket then (they grow so fast!!) so I scooped her up and threw her in the car seat, shoeless. Ryhkhey, who had been patiently waiting in her carrier this entire time fit perfectly in the back of the Jeep and I hastily folded up Grandma’s walker and tossed it in on top. Usually I empty the caddy in her walker but there was no time for that. I placed the diaper box of cat, half duct taped and tangled with yarn on Grandma’s lap in the front seat and we were off.

Of course, as we started driving the inevitable happened. Ryhkhey, who had been waiting so patiently, could wait no more, and did a job in the carrier. The smell made our nostrils burn and filled the jeep like the thick dense fog in cartoons.

We arrived to the office, almost 25 minutes late, but the amazing staff actually came out to the car to help unload, which was awesome. The vet tech waited as I opened up the back of the car to get Ryhkhey. At that perfect moment, the contents of Grandma’s walker caddy spilled out onto the street. Apparently it was laundry day, because inside the caddy were about 15 pair of underwear!

There I stood, almost a half hour late, with one poop covered long-haired cat, a shoe-less, toddler, a Grandma holding a box of cat (fastened with yarn and duct tape), and a giant pile of granny panties at my feet.

A day in the life.